“Social business is dead!” … “Whatever!”

As he finished a game of Cut The Rope on his iPhone, my young godson asked what my phone was like when I was his age. I broke it down for him. I was in my twenties before someone offered to take north of ten thousand dollars for a basic digital camera, and not much less for a GPS device. And I got my first basic mobile phone (I explained that means just making phone calls and sending text messages) as I approached thirty.

A few days later, as she dispatched her umpteenth snapchat of the morning, my niece asked me why I obviously enjoy what I do for a living. Imagine a whole lifetime, I replied, during which the only innovation was a tweak to the angle of the plow shear.

Scientists and engineers have been good to us. We’ve come to expect serious technological innovation with the regularity of the seasons. So, just like Chris Heuer, I’m more than ready for corresponding organizational change.

As in right now!

Having reflected briefly on the vast progression of the Internet and the web, computing, mobile infrastructure and social media services – as if you needed a reminder – let’s look at what’s changed at the typical organization during this time, my adult lifetime. Or more pertinently what hasn’t. END_OF_DOCUMENT_TOKEN_TO_BE_REPLACED

Brian Solis won't mind me pointing out that he likes to invent memorable turns of phrase. It's a common trait amongst communicators working on any cutting edge because sometimes existing phraseology doesn't quite do justice to the point being made. So here we are, discussing human seismography.

Firstly, Brian's post "Oil Spill Report: BP and White House Sentiment Spills onto Twitter" reviews the sentiment towards BP as expressed on Twitter. Perhaps the most interesting aspect of this detailed analysis is the deleterious knock-on impact the disaster has had on sentiment towards President Obama. Of course, correlations offer no evidence of cause-and-effect unless individual exclamations of feeling explicitly express such a connection, and this is something social web analytics can examine. END_OF_DOCUMENT_TOKEN_TO_BE_REPLACED

An interview with Brian Solis 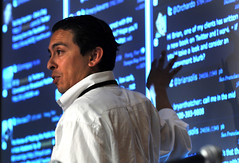 I interviewed Brian Solis for the CIPR's website recently. Brian is one of the most prominent thought leaders and published authors in new media. A digital analyst, sociologist and futurist, Solis helps practitioners get to grips with the effects of emerging media on marketing, communications and publishing.

His perspectives are well worth a listen:

One quote I'd pick out is this:

PR used to be right there at the top, but we slipped into publicity and media relations and spin, and forgot the opportunity to steer and shape perception, just such an opportunity afforded by participation and engagement in social media.